From the Sarp-Siac trade fair to the latest International biennial event: the growth continues. Here is an infographic with the latest edition figures
In 1973 the automotive aftermarket sector in Italy was showcased at the Sarp-Siac exhibition. Today, almost fifty years later, the technological innovations linked to the mega trends of mobility - AI, IoT and Big data – found a home at Autopromotec.

The history of the international automotive aftermarket exhibition spans almost half a century, and in all this time countless changes have been witnessed: starting with the birth of the event itself. The idea of a trade fair dates back to 1965 when Luigi Degli Esposti, secretary of Airp (Italian Association of Tire Retreaders) decided to inaugurate the Sarp (Tire Retreading Equipment Show) in Rome, with the aim of giving visibility to the technological development of the world of retreading. Two years later, the show moved to Bologna and increased its international outlook. But the turning point for Autopromotec's “ancestor” came in 1973. Onelio Picchioni and Giorgio Cometti, co-founders of Aica (Italian Association of Automobile Equipment Manufacturers), decided to merge two international exhibitions, the already mentioned Sarp and Siac (International Exhibition of Equipment, Workshops and Bodies), thus creating a single exhibition dedicated to the world of the automotive aftermarket: the aim was to connect companies in the supply chain with the largest number of potential buyers, both in Italy and abroad.

However, a few more years, and a "new world", would be necessary to see the name of the event change. In 1991, in fact, the organizers did away with the name Sarp-Siac and adopted a new brand, Autopromotec! Since then, a lot of time has gone by, and the most specialized international aftermarket exhibition of automotive equipment has now become a sort of selection of specialized events where, thanks to its hall-by-hall approach, visitors can plan specific routes customized according to professional interests. Throughout this time, the fair has kept pace with the technological and professional growth of the automotive sector, becoming a reference point between supply and demand, as a place where business and networking opportunities are created on a global level. And the figures of the last edition are a definite proof of this. 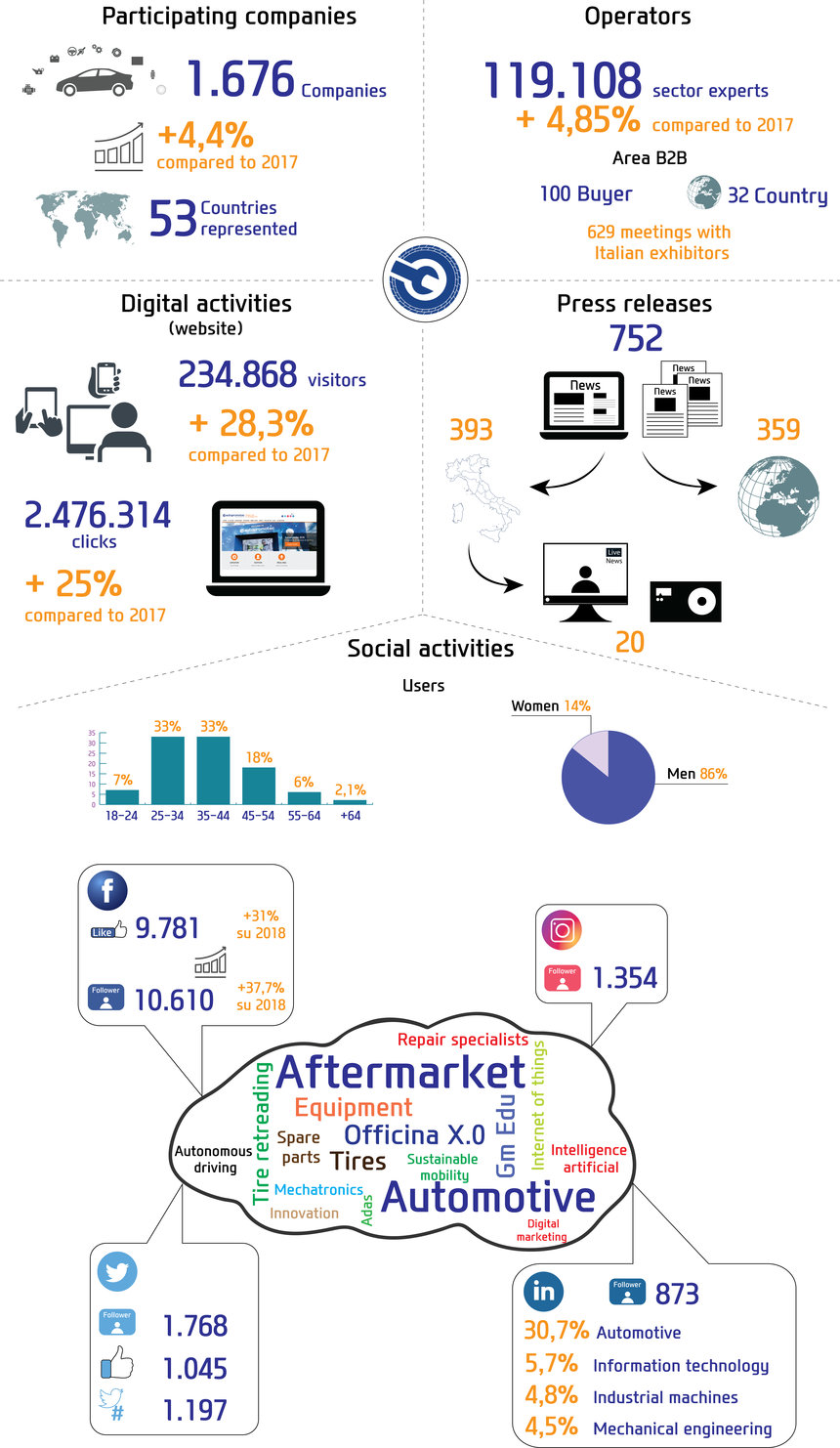 Autopromotec 2019: the numbers
The 28th edition of Autopromotec confirmed itself as a reference point for the vehicle maintenance sector worldwide. In fact, 1,676 companies chose the event as the perfect showcase for their products and services - often for the first time - with a 4.4% increase over the number of companies present in the previous edition, in 2017. Of these, the share of foreign companies was 43%, with a total of 53 countries represented. The event, which took place in 17 exhibition halls and 5 outdoor areas, for a total exhibition space of 162,000m2, attracted 119,108 professional operators (4.85% more compared to 2017) who had the opportunity to meet specialist companies from all sub-sectors of the aftermarket. Once again Autopromotec proved its international value with a share of foreign professional operators equal to 18% with more than 100 delegates from 32 countries. Buyers and institutional operators were the protagonists of 629 B2B meetings with Italian exhibitors, organized as part of an international plan to promote Autopromotec and the entire automotive aftermarket chain, the result of a collaboration between the Emilia-Romagna Region and ICE (Italian International Trade Agency).

The events and initiatives organized during the 5 days of the event captured the interest of both the trade press as well as the general press, evidenced by the 752 press releases on Italian and foreign newspapers, magazines and websites. Television and radio coverage, both specialised and general, produced 20 dedicated programs broadcasted by Italian TV channels. In addition, a significant increase in digital activity was also recorded: in the first five months of 2019, the Autopromotec site hosted 234,868 visitors (+28.3% compared to the same period in 2017), for a total of 2,476,314 pages viewed (+25% compared to the same period in 2017). The number of users who followed the 2019 edition of Autopromotec live, interacting actively on social profiles, was also remarkable. The highest volume was on Facebook with 9,781 likes. The contents shared by the 10,610 followers were videos, particularly appreciated, followed by historical photos and live photos taken in the exhibition halls and at events held during the days of the fair. This type of live contents received a positive response also on Instagram, a platform that witnessed an exponential growth in May, especially in the 25-44 age group. Rather different were the live debates held via Twitter and Linkedin. In the first case, the tweets by 1,768 followers concerned the sharing of news and information useful to exhibitors and visitors. As far as Linkedin is concerned, the discussions that took place focused on topics related to the automotive, IT and mechanical sectors.

Autopromotec 2019, traveling around the world to learn about automotive news
July/August 2018 Car tariffs, trade wars and the consequences for European car makers
Battle for data
Autopromotec 2019: Here are the figures of a successful edition
The aftermarket industry to probe the Asian market
Autopromotec, mission to China